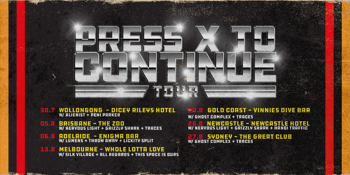 Ghost Complex and Traces
The Newcastle Hotel (Islington, NSW)
Friday, 26 August 2022 6:00 pm
14 days away
18 Plus
Punk
Heavy Metal
Send this event to
We Set Signals are finally back with an East Coast tour this July/August to debut their new single "Press X to Continue".

We Set Signals is a five-piece Brisbane rock band who combine elements of pop punk and metalcore reminiscent of heavyweights such as A Day To Remember and I Prevail. The band released five singles in the lead up to their record via We Are Triumphant Records (USA) called “Ordo” in October 2020. In 4 months, that record broke 1M streams. 'Where Were You' consistently sat at number five on the Triple J Metal Chart and added to rotation on Triple J and Rage.

"Press X To Continue" brings a new sound following the success of the cover "Shivers" for the label's "Got you covered album". Keeping the heavier sound while tapping into the pop-punk sound, giving the single the best of both worlds.