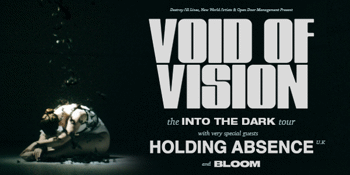 Void Of Vision – Into The Dark Tour

with Holding Absence (UK) and Bloom
The Newcastle Hotel (Islington, NSW)
Sunday, 22 May 2022 7:00 pm
5 days away
18 Plus
Australian Artists
Music
Electronic
Metal / Hard Rock
Send this event to
Fresh from the release of their 2021 EP CHRONICLES I: LUST, Void Of Vision continue to take fans on a journey of twists and turns with the release of their forward-thinking new single 'DOMINATRIX' today. Arguably their most adventurous song to date, 'DOMINATRIX' takes the listener on a journey between crushing heaviness and light, ethereal vocals.  "The process began with that simple chorus vocal hook and ended up with our most adventurous attempt at a piece of work yet. I have never written, or attempted to pen a ‘love song’ before but this one just came extremely easily to me," says Void Of Vision vocalist Jack Bergin. "The lyricism of 'DOMINATRIX', while quite foreign within a Void Of Vision song, is really complimented here by the track’s pace, flaunting a certain urgency, a longing for excitement and stimulation.” Of its new music also out today, Jack adds: "The pre-production title for this track was funnily enough ‘niteclub’ so I think that the music video idea was always planted in my brain from the get go. Despite several obstacles hindering shoot day, including myself only leaving hospital the night before and a fire engine call out within the first 30 seconds of shooting, it all came out exactly how we envisioned which we were so happy with.  "I really dialled in on the producer role for this video and I think it really gave me a LOT more confidence to take the idea of that role even further in the future. I really hope it puts people in the mindset we were in while creating this, and pushes forward a side of Void Of Vision that people haven’t particularly been introduced to properly yet. There’s a lot more where this came from that definitely pushes the envelope of the idea of VOV as a collective..”